This school facility is located in Kokkinovrahos, in the Municipality of Keratsini-Drapetsona in Piraeus. The main challenge of the project was the confined site. In other words, the new school would replace the older one, which was built in a dense city web, leaving little space for the creation of the schoolyard. Another thing we had to take into account when designing was the heavy program of the building and the new spaces it would need in order to operate as a school for elementary and junior high school students. The structure that was designed was that of two cubes with an empty floor in between them. In more detail, because of the pre-defined site we faced a limit as far as the shape of the building is concerned. Having in mind the fact that the new school should be distinct from the other buildings in the area, we designed a «playful» and light structure, combining elements of the city (concrete) and Nature (wood and tree-shaped columns). The first volume of the building doesn’t occupy the ground floor, leaving a sheltered place for the movement of the people. The second volume is also created in distance from the first, creating a second sheltered place that can also be used as a yard for the children. The building has false facades made of wooden columns in order to allow enough light and wind to enter the classrooms. The school building also has a green roof.

With the thought that schools are the first step into an organized society, we designed a school that is inspired by its built environment. The main structure is that of a cuboid, but what differentiates it from the other building is the fact that it appears to be lighter: the level of the ground is free for the movements of the people. One of the most crucial things to take into account was the school yard for recess. Apart from the ground floor, there is a second yard in between the floors of the building. That way, the empty spaces for the kids are doubled, but we gain something more: the volume is divided into two smaller volumes with an empty floor in between them. The floor that is used as a schoolyard makes the building seem less dense and is a direct way to distinguish that each volume is hosting a different educational level (the first cuboid operates as an elementary school and the second as a junior high ). Both schools have access to both yards, in order to enable the kids to socialize with each other. As far as the facades are concerned, the building has two facades that are in contact with the city web and those facades have large windows in them, in order to secure that the classrooms will have more than sufficient sunlight and ventilation. There is also a second facade in front of each one, which consists of circular cross-section columns. The second facade has two roles, the first one is safety and the second one is providing shade. Last but not least, the building has a green roof, which is an element that connects the building with Nature, and also is a way to replace the green ground floor.

On hold for Construction 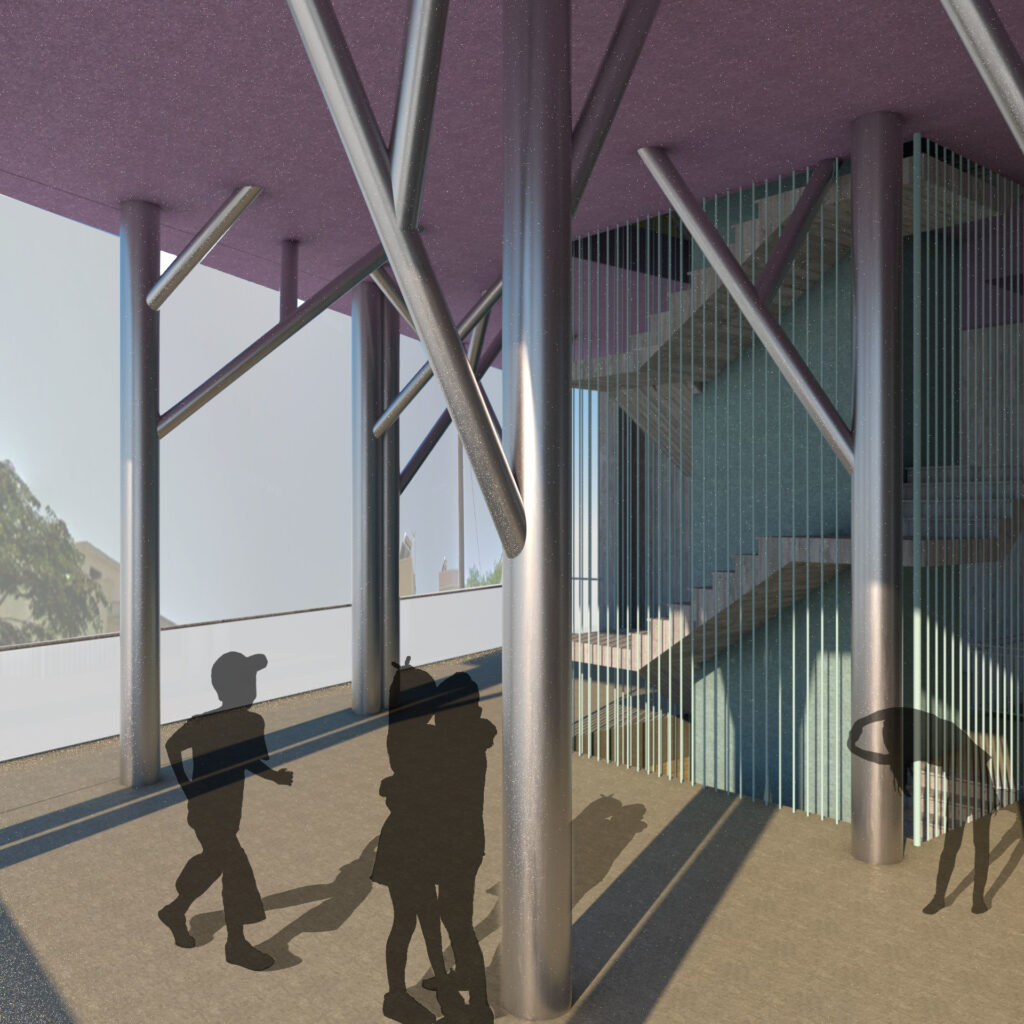 iT IS AN EDUCATIONAL COMPLEX BUILDING DESIGNED TO HOST HIGHSCHOOL